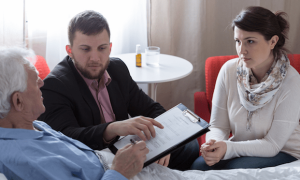 A guardian may not make medical decisions on behalf of an incapacitated person who remains capable of making medical decisions for themself. Let’s dive deeper into this discussion.  New Jersey Courts have ruled that where feasible and appropriate, a guardian should act in the best interests of his or her ward.

If it is determined that an incapacitated person cannot make their own medical decisions, a guardian must make these decisions for him/her in accordance with the incapacitated person’s own wishes to the extent possible. Accordingly, “if a ward has previously executed a valid power of attorney for health care or advance directive . . . a guardian of the ward should act consistently with the terms of such document unless revoked or altered by the court.” However, if no such document was executed, the guardian must still “give due regard to the preferences of the ward, if known to the guardian or otherwise ascertainable upon reasonable inquiry.”

In a packet by the New Jersey Administrative Office of the Courts, it is advised that any guardian making a medical decision on behalf of an incapacitated person must do so “based on the principle of informed consent.” Administrative Office of the Courts, Guardianship of the Person: Duties & Responsibilities 7 (2017). Therefore, a guardian must “have a clear understanding of the outcomes, risks, and benefits of each proposed medical/health procedure, alternative option(s)”, determine the implications of their decision, and “maximize the participation of the person [under guardianship] in making the decision.”

Any articulated objection by the ward to a proposed medical decision made by their guardian under N.J.S.A. 3b:12-56 may be brought to the “Superior Court, Chancery Division, Probate Part, which, in its discretion, can appoint an attorney or guardian ad litem for the ward, hold a hearing or enter such order(s) as may be appropriate under the circumstances.” Therefore, “instead of prohibiting the guardian from authorizing specific types of medical decisions, New Jersey requires court approval if the incapacitated person objects to any decision made by the guardian.” Therefore, in making any medical decision for a person under guardianship, the guardian must do so in accordance with that person’s wishes to the extent possible.

In most circumstances where a guardian has been appointed, they do not need court permission to make medical decisions, commitments, and approve medical procedures, etc., if the ward agrees.  Where the ward only partially agrees with conditions or objects, the guardian must reasonably comply with the permission granted and the conditions requested, etc., or go to court to overrule the ward’s restrictions, etc.

If the ward is totally incapacitated mentally, has no POA or guardianship in place and objects to whatever is being recommended for him/her, someone must go to court to get permission to do what needs to be done.

Decisions Regarding Commitment to a Psychiatric Facility

A guardian may authorize life or death decision-making regarding life-sustaining treatment on behalf of a patient who is in a chronic vegetative state. Such decisions will be carried out in consultation with the physician and hospital Ethics Committee that the decision is appropriate. In Matter of Quinlan, a father sought appointment as guardian of his comatose daughter, with express authorization to discontinue all medical procedures on her behalf. The daughter was in a vegetative state, and her doctors confirmed that there was “no form of treatment which would cure or improve” her condition. The Court held that when a patient is in a chronic comatose state and is entirely unable to assert their own medical decisions, their “right of privacy may be asserted on [their] behalf by [their] guardian.” Therefore, a guardian may select the physician that will be treating the ward. If that physician believes that there is no possibility the patient will return from their comatose state, they shall consult with the hospital’s Ethics Committee to determine whether the life-supporting system may be withdrawn.

While the Quinlan case addresses life-sustaining treatment for comatose patients, a later case, Matter of Conroy, addressed a category of incompetent, institutionalized patients who, “while significantly diminished, were not as limited as those of irreversibly comatose persons, and their deaths, while no longer distant, may not be imminent.” In such cases, “court involvement will [ordinarily] be limited to the determination of incompetency, and the appointment of a guardian unless a personal guardian has been previously appointed, who will determine whether [one of the following tests] have been satisfied.” Therefore, once the incapacity to consent to or refuse life-sustaining treatment is determined, the guardian may decide to withdraw or withhold life-sustaining treatment upon satisfaction of one of the tests outlined below.

a.  The Subjective Test – Under the subjective test, “life-sustaining treatment may be withheld or withdrawn from an incompetent patient when it is clear that the particular patient would have refused the treatment under the circumstances involved.” Therefore, a guardian may refuse or withdraw life-sustaining treatment on behalf of an incapacitated patient if there is clear evidence that the patient would have done so themselves.

b. The Limited-Objective Test – If there is limited evidence regarding the patient’s wishes, “life-sustaining treatment may be withheld or withdrawn” if there is some evidence that “the patient would have refused the treatment,” and evidence that the burden of continuing life outweighs the benefits. Therefore, if evidence of the ward’s wishes is limited, the guardian may refuse or withdraw life-sustaining treatment on their behalf upon some evidence that they would have refused the treatment themselves, and that the burden of continuing to live outweighs its benefits.

c.  The Purely Objective Test – When there is no evidence regarding whether the patient would have accepted or declined the life-sustaining treatment, the purely objective test applies. “Under that test . . . the net burdens of the patient’s life with the treatment should clearly and markedly outweigh the benefits that the patient derives from life.” Therefore, if there is no evidence regarding the incapacitated person’s wishes, life-sustaining treatment may be withdrawn upon clear evidence that the burden of continuing life outweighs its benefits.

Once one of the above tests are satisfied, the “person who believes that withholding or withdrawing life-sustaining treatment would effectuate an incompetent patient’s wishes or would be in his ‘best interests’ should notify the Office of the Ombudsman of the contemplated action,” who must then investigate the situation and report to the agency that regulates the facility in which the elderly, incompetent patient stays.

Therefore, once it is determined that a patient does not have the capacity to accept or refuse life-sustaining treatment, an appropriate surrogate decision-maker may make such decisions on their behalf upon the satisfaction that doing so would either effectuate the incapacitated patient’s wishes or would be in their best interest. Once a decision regarding the withdrawal of life-sustaining treatment is made, it must be investigated by the Ombudsman, and will not be effectuated until the Ombudsman confirms that it is appropriate under the circumstances.

If the patient is entirely comatose with no chance of recovery, the guardian may assert the withdrawal of life-sustaining treatment, which will then be assessed by the physician and the hospital’s Ethics Committee for appropriateness.

If the patient is incompetent but not entirely comatose, the court’s involvement is limited to determining that the patient is unable to make a decision regarding life-sustaining treatment for themselves, and determining that the current guardian is the appropriate party to make this determination. Once the court determines this, the guardian will make their decision to withdraw life-sustaining treatment based on evidence of the ward’s wishes, or, if there is no such evidence, upon evidence that the burden of continuing life outweighs its benefits. This decision is then assessed by the Ombudsman to prevent abuse.

Appointment of a Special Medical Guardian

When a patient is “unable to consent to medical treatment” and prompt medical treatment is necessary, and there is no general guardian or Advance Directive for the individual, the Court may appoint a special medical guardian to make medical decisions on their behalf. An action for appointment of a special medical guardian is brought “on the application of a hospital, nursing home, treating physician, relative, or other appropriate person under the circumstances.”

Where prompt medical attention is necessary, but there is no guardian currently appointed and the individual has not yet been adjudicated incapacitated, the right of the individual is “to have a determination that he or she can make the determination and, if not, to have some competent able person to make it in the best interests of the person.”  Therefore, the Court must first determine that the individual is incapable of making medical decisions for themselves due to incapacity. The standard for such determinations is that “the mental capacity to give consent to a surgical procedure is the same as that required to enter into a contract.”  Upon evidence of such incapacity, the Court may appoint a surrogate decision-maker for that person to consent or refuse treatment on their behalf.

My Conclusion to This Long, Complicated Discussion of Guardianship Authority to Make Medical and/or End of Life Decision Making

If an incapacitated person remains capable of understanding the risks and benefits of medical treatment, they may continue to make their own medical decisions. Only if it is determined that they are unable to make such decisions for themselves may their guardian make medical decisions for them. In doing so, the guardian must comply with the incapacitated person’s wishes, whether derived from a valid Advance Directive or known from conversations with the individual.

For decisions regarding life-sustaining treatment, a guardian may assert decisions for the incapacitated individual that is in a chronic vegetative state. The physician and hospital Ethics Committee will then assess the appropriateness of that decision. For institutionalized patients with diminished capacity, the Court must determine that the patient is unable to make medical decisions for themselves and that the guardian is the appropriate decision-maker under the circumstances. Upon this determination, the guardian must act in accordance with the patient’s wishes, if they are known. If no evidence of the ward’s wishes exists, the guardian may only withdraw life-sustaining treatment if it is determined that the burden of continuing life far outweighs its benefits. Before a decision by the guardian to withdraw life-sustaining treatment is effectuated, it must be investigated by the Ombudsman to prevent abuse.

Finally, if there is no guardian currently appointed, but an immediate medical decision is necessary, the Court may appoint a special medical guardian to make medical decisions on the incapacitated person’s behalf. To do so, the Court must find that the patient is unable to consent to or refuse treatment for themselves. Upon such a finding, the Court may then appoint a special medical guardian to consent or refuse treatment for the incapacitated patient.

Dealing with a difficult medical decision for a person who may be incapacitated or who has been found incompetent by a court and need to better understand the extent of your medical decision-making authority, then please reach out to Fredrick P. Niemann, Esq. to discuss the many alternatives to guardianship under NJ law.  You’ll find him easy to talk to and very understanding of the day-to-day issues you are confronting. Call him toll-free at (855) 376-5291 or e-mail him at fniemann@hnlawfirm.com.  He welcomes your calls and inquiries and you’ll find him very approachable and easy to talk to.