Profile:  Meet the Victim and the Abuser

Do you have a stereotype of the typical victim and/or perpetrator of elder abuse in your mind?  I do.  Let’s meet them. 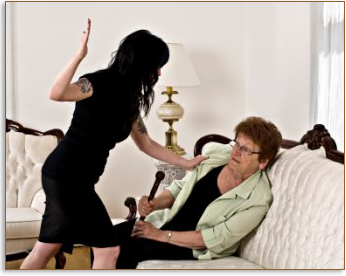 The typical victim of abuse is a female but often a male, 75 years of age or older who may have some physical or cognitive condition that makes this person vulnerable.

The person’s existing physical condition(s) makes him or her a more likely target for abuse, neglect or financial exploitation.  The abuse may be psychological or cognitive decline that has gradually increased over the years. Our victim is generally isolated from the world around him or her.  Sometimes the victim resides in an institution.  The victim may have few alternatives to remove herself/himself from the abusive environment because of their financial condition, health or age, likely a combination of all three.

The Abuser: Meet The Middle-Aged Child, Spouse, A “Friend”

The abuser may be the victim’s middle-aged child who is also the victim’s caregiver.  Many children harbor decades of anger and/or resentment towards their parents for perceived injustices, failures or favoritism.  The abuser may even be the victim’s spouse (especially a second and subsequent spouse) or grandchild.  An individual without close family may be exploited by a “friend”.  If the individual resides in an institution like a nursing home, the abuser may be an employee of the facility or another resident of the facility may be the abuser.

Profile of the Physical Abuser

Typically, the physical abuser of an elder is the son (though I could easily insert “the daughter” instead and be accurate in my description except for gender) of a widowed woman.  He is either divorced or and has come back to live at home with mom because of financial pressures borne by a divorce or he is single and has never left home.   He tends to be in his late 30’s to mid-40’s, while his mother is usually in her mid-to-late 70’s/80’s.  In most cases, the son is lazy and unemployed.   He will have used a variety of excuses as to why he is unable to work, and his mother has accepted such excuses.  He often will be addicted to alcohol (normally beer), narcotics, or gambling.   In order to feed his habit, the son extracts money from his mother.  There may come a time when the mother refuses to provide any more money, and this tends to be the flash point for violence.  Violence may begin with him breaking objects in the home that he knows the mother values.  An escalation of violence may materialize by grabbing his mother’s arms and shaking her or pushing her into furniture or throwing an object at her.  Characteristically, the mother will not immediately call the police, perhaps out of a sense of failure or shame.   Often, neighbors hear the altercations between the son and his mother, but they may also be reluctant to involve the police.

Home Health Aides: Angels of Kindness, or Not?

Many (I believe most) home health aides are terrific and help to care for the basic physical and emotional needs of our aging adults. They clean, provide medication, assist in grooming and other activities of daily living. Over eleven million adults age sixty-five (65) or older require care at home or in an assisted living residence, or a residential care environment other than a nursing home. This number will skyrocket in the coming years.

Surprisingly there are no uniform state and federal laws and regulations covering home health aides, other than standards imposed under the NJ Medicaid/MLTSS program and other Medicaid waiver programs, and title 10 of the New Jersey Administrative Code which is a generalized regulatory outline applicable to home health agencies, but not independent home health contractors.

While NJ requires the criminal background checks of many caregivers, these laws only apply to in-home health care agencies (and again), not independent contractors and self-employed caregivers who are found privately by family members and interested persons.

Home health aides are often paid slightly above minimum wage and lack health insurance coverage and other benefits commonly offered to employees in other occupations. Thus, the intersection between home health care workers and elderly financial exploitation comes to this intersection. Some caregivers prey on older clients by physical threats but mostly accomplish their financial “crimes” by manipulation, undue influence, outright theft.

I cannot stress enough to all readers of this site to do as much due diligence as you can into the credentials and background of any prospective in-home caregiver.

Meet the Victim and the Abuser When Elder Abuse is Suspected

Another common scenario of an abusive relationship finds the victim frail or disabled and the perpetrator suffering from psychological problems or the effects of alcohol/drug abuse.  In surveys of various types of elder abuse cases, the patterns described above are often found.  If you recognize a pattern in a relationship like that described above, it probably is a case of elder abuse and you should report or act now.

Do you have a question(s) on an elder abuse or financial exploitation matter not addressed here?  If so, contact Fredrick P. Niemann, Esq. toll-free at (855) 376-5291 or email him at fniemann@hnlawfirm.com to schedule a consultation about your particular concerns.  He welcomes your calls and inquiries and you’ll find him very approachable and easy to talk to.