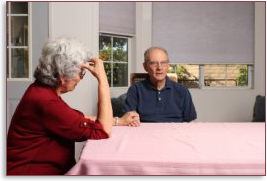 How to Spot Alzheimer’s Disease: Signs of Progression

Alzheimer’s starts off as a slow developing disease. Many individuals and their loved ones do not recognize the symptoms initially until the disease has progressed to a mid-level stage, though if one is true to themself, they intuitively know something is not right. It is always important to be on the lookout for signs of Alzheimer’s. Spotting the disease early can significantly benefit you and your loved ones.

The Progression of Alzheimer’s

Signs and Symptoms of Early-Stage Alzheimer’s

This can be the most difficult area of discussion, as restricting driving privileges takes away one’s independence and thus will likely be met with resistance.

It is important to remember that a doctor must diagnose Alzheimer’s. Don’t automatically assume someone has the disease simply because they manifest one or more of these signs. Always consult your physician. However, spotting the symptoms of the disease at its early stages is important, as the earlier the diagnosis is made, the early treatment can begin.

Signs and Symptoms of Mid-Stage Alzheimer’s

As Alzheimer’s progresses, you will find the early-stage signs will become more obvious and more challenging for the individual with the disease. Some new signs and symptoms will also arise.

As individuals sense losing their memory, they often feel threatened and as a result, their “fight or flight” response is activated.

The impact Alzheimer’s disease has on short-term memory is unfortunately significant. Individuals with the disease often have trouble remembering things that just happened. They may also begin is forget what purpose certain objects are used for, such as keys to open doors and placing shoes go on their feet.

Individuals often have increasingly significant problems concentrating. One of the most common displays of declining concentration is the repetition of words and sentences.

As mentioned in the early stages, depression often occurs as Alzheimer’s develops. As the individual realizes the disease is becoming more and more prevalent, they often develop even more significant mood and behavioral changes.

One of the scariest symptoms of Alzheimer’s, individuals often forget where they are going or wander off, confused or unsure as to their destination.

Not only does the individual lose their short-term memory, but some of their long-term memory as well.

Signs and Symptoms of Late-Stage Alzheimer’s

Along with swallowing comes a loss of other general motor skills.

Always remember that your loved one’s ability to communicate through their emotions typically continues throughout the entirety of Alzheimer’s. Regardless of how significant the disease is, your loved one can still feel loved, special, cared for, etc. As a caregiver, you are often in the best position to give them peace of mind. Simple actions like reading to them, telling them stories, holding their hand, and others can help them maintain that feeling of being loved.

Please contact Fredrick P. Niemann, Esq. with any questions you have concerning Alzheimer’s Disease, Dementia, or Elder Care in general.

He welcomes all your inquiries.