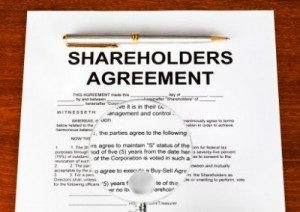 Let’s be honest.  How often do we read contracts and other legal agreements we sign?  Did you really read all the fine print in the contract when you leased your first apartment, bought your home, purchased life insurance, or signed up for your homeowners or auto insurance policy?  Maybe you did, and if so that’s great (especially if you understood what you read) but, you’re in the minority. If you didn’t carefully read those agreements then you may have obligations or consequences you’re not even aware of.

The reason I am bringing these examples to your attention is because a shareholder agreement is also a contract.  Its terms are completely voluntary and cannot be forced upon you or any co-shareholder without his or her consent.  Once you sign, however, you’re bound to its terms absent fraud or other recognized defense(s). In other words, you will assume legal obligations in strict accordance with the terms you agreed upon in the shareholder document.

Introduction to a Shareholder Agreement Under NJ Law

Under the terms of a well-written shareholder agreement, the day-to-day business of the corporation can be decided by the majority vote of the shareholders or by a different percentage (i.e., super majority (66%) or even unanimous consent), but again notice I said, “under a well-written shareholder agreement”.  Your shareholder agreement can and should address the election of officers such as the President, CEO, Treasurer, Secretary, and key personnel to transact most day-to-day business instead of calling numerous meetings and taking numerous votes for routine business matters and decisions. Think of a written shareholder agreement as a verbal agreement that covers everything that the shareholders discussed and agreed upon before they started the business. The only difference is you memorialize the verbal agreement in writing. If you don’t, each shareholder has equal rights to the management of the company, the right to equal access and inspection of all business records and to a formal accounting of the corporation’s transactions and affairs, if demanded. Remember, people’s memory and understanding of things can and often does changes over time.

Can a Written Shareholder Agreement Be Changed After It’s Signed?

Should this happen, the distribution of shareholder assets (unless otherwise provided for in the original shareholder agreement) is made first to creditors in the order of their priority, to shareholders for loans advanced for capital contributions and, finally, profits, if any, to the individual shareholders.  If the assets of the corporation are insufficient to satisfy creditors, the shareholders are not personally liable, to make payment to the creditors in the absence of a personal guaranty.

Generally speaking, to avoid ugly and expensive shareholder fights and lawsuits, Fredrick P. Niemann, Esq., an experienced NJ shareholder rights attorney in New Jersey, recommends that all shareholder agreements be made in writing.  Otherwise, the shareholders will face time-consuming contentious litigation in the event of a disagreement or a claimed breach of shareholder rights.

Contact me personally to discuss your shareholder agreement and rights as a shareholder of a NJ company.  I am easy to talk to, very approachable and can offer you practical, legal ways to handle your concerns and protect your interests.  You can reach me toll free at (855) 376-5291 or email me at fniemann@hnalwfirm.com