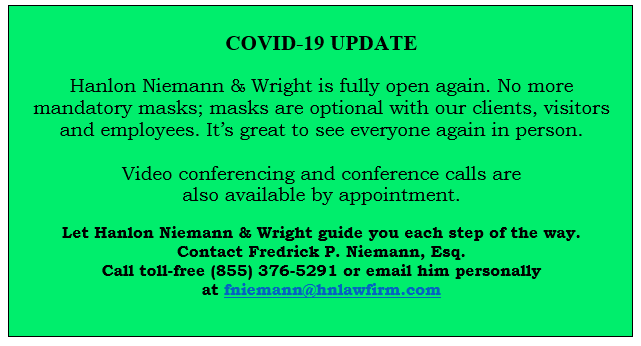 Get the Important and Relevant Information You Need As a Shareholder of a NJ Corporation Here…  NOW!

Not Sure What Your Rights Are as a Shareholder in New Jersey?

Before I discuss the title of this page, let me ask you a few simple questions.

If the answer to any one of these questions is yes, then you’ve come to the right place.

I’ve written this page with you in mind. Hanlon Niemann & Wright has negotiated and written all types of shareholder agreements addressing all types of business relationships and issues for over 40 years. We understand from experience the details and laws that must be considered to protect your interests as a shareholder.

Shareholder laws are complex and not always easy to understand.  Knowing how to navigate you through it is our job.  As lawyers for businessmen and businesswomen throughout New Jersey we’re experienced in the real world of NJ business and shareholder rights when companies do business in this state. When shareholder conflicts occur and litigation is filed or threatened, the trial attorney(s) at Hanlon Niemann & Wright are prepared and ready to defend your interests as a shareholder client.

Since our meeting, I have learned that the deal was, in fact, a scam and that I would have lost my entire investment. The straight talking highly investigative nature of Mr. Niemann’s questioning and insight coupled with his significant past business experience was of invaluable help to me.
Scott Buongiovanni Freehold, New Jersey

TESTIMONIAL
Fred is a very detailed person. He knows the law and uses it to the fullest to defend his client(s). I had the opportunity to work with Fred several times over the last 25 + years and have been very satisfied with his performance. I would have no reservations in retaining Fred for legal advice if and when the opportunity presented itself.

TESTIMONIAL
In my negotiations with a large international corporation, Fredrick P. Niemann worked with me to the end.  They were thoughtful and proactive in identifying the issues of concern to me, issues I hadn’t even thought of.  I was very satisfied with the services they rendered.

Finally, I’ll cover with you in detail shareholder rights under New Jersey’s extensive shareholder laws and the options and remedies available to shareholders should legal action be necessary to protect their interests.

Please take your time to read each page of our site and watch our informative videos.

And if you’re involved in or about to be involved in an actual or potential shareholder dispute and you would like to speak to a shareholder trial litigation Attorney, call Fredrick P. Niemann personally toll-free at 855-376-5291. You may also e-mail him at fniemann@hnlawfirm.com.

He welcomes your inquiries and you’ll find him easy to talk to as he counsels you on your NJ shareholder matter.