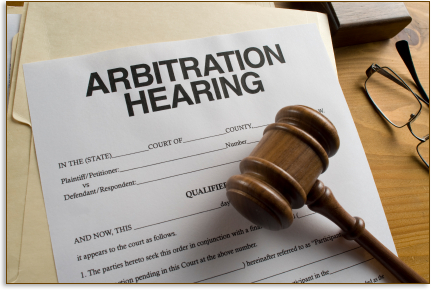 Arbitration is a dispute resolution process by two or more individuals and/or entities who by voluntary agreement establish terms by which their dispute or issue of disagreement is submitted to a neutral third party for a binding decision.

Mediation is not a form of arbitration.  It is a process whereby parties voluntarily agree to submit their dispute and/or disagreement to a neutral third party whose function is to try and settle the disagreement instead of filing a lawsuit or submitting the dispute to binding arbitration.

How Does Arbitration Differ from Mediation?

An Arbitrator’s decision is legally enforceable.   An Arbitrator is vested with powers comparable to that of a Judge.   In Mediation, the Mediator is the facilitator, meaning a person who tries to bring the parties closer to settlement but has no legal authority to make a binding decision or to enforce his/her decision.

Can You Explain the Arbitration Process?

That is a broad question.   An arbitration proceeding can be formal or informal.  There are Arbitration Associations that have rules and procedures for the conduct of arbitration hearings.  Generally, in arbitration, the parties select an Arbitrator and are bound by the rules and procedures that govern the administration and management of the case.  The parties to the proceeding submit evidence and proof to support their case to a neutral Arbitrator who makes his or her decision based on the information provided to him or her.   Upon conclusion of the Arbitration Hearing and receipt of the Arbitrator’s Award, the outcome can be enforced by either party in a Court of law.

Who Can be an Arbitrator?

Is a Binding Arbitration Clause Found in Many Contracts and Documents Enforceable?

Yes: New Jersey Statutes as well as New Jersey case law have specifically held that binding arbitration clauses that meet the disclosure requirements under the law are enforceable and the parties must submit their dispute to an Arbitrator for final decision.  Federal law involving mandatory arbitration of disputes under the jurisdiction of both the federal and NJ courts is also enforceable.

How is an Arbitrator Selected?

Where are Arbitration Hearings Held?

What Does the Term Arbitration Award Mean?

Is an Arbitrator’s Decision Legally Binding?

How Does the Arbitration Appeal Process Work?

A Notice of Appeal must be filed with the Superior Court Clerk in New Jersey following the Arbitrator’s Award.  Thereafter, the Court will establish a briefing schedule as well as a hearing date for the parties to appear and argue why the Arbitrator’s Award should either be reversed, confirmed, or modified.

Are There Rules that Govern Arbitration Proceedings?   If so, Where are They and Where Can They be Found?

How Does Arbitration Differ from Litigation?

Litigation in the traditional sense involves attorneys, judges, and elaborate court rules, procedures and evidence.   Arbitration is less formal and is generally managed by a single arbitrator though there are occasions when multiple arbitrators are required to decide the case.   In traditional litigation, there is the potential for significant motion practice as well as discovery proceedings that precede either a jury or non-jury trial.   In arbitration, the Arbitrator in conjunction with the parties and their counsel defines the scope of discovery and motion practice in a much more expedited and simplistic manner.   As a consequence, arbitration hearings are generally scheduled within six (6) months but not later than a year from the date of the original filing.   The parties can, however, agree to whatever formalities they choose including that the New Jersey Rules of Evidence and the New Jersey Rules of Civil Procedure be adopted and applied by the arbitrator.

Does New Jersey Have Laws that Govern Arbitration?

How Long Does Arbitration Take?

How Much Does Arbitration Cost?

Arbitration costs are determined in large measure under the rules of the various Arbitration Associations.  There is a schedule of fees and charges that are listed on each association website and are generally based on the value of the case.   If the parties can voluntarily agree to private arbitration, in lieu of arbitration by an association, these fees are not applicable.   The Arbitrator’s hourly rate is established by the Arbitrator at the beginning of the proceedings and is jointly shared by the parties to the arbitration.   Fees can be as low as several hundred dollars per hour to several thousands of dollars per hour depending on the complexity and the nature of the arbitration.   Construction-related arbitration cases and complex litigation cases generally incur significantly greater costs and expenses than consumer or other less complex matters.

How Do I Know Whether My Case is Subject to Binding Arbitration?

This question can be answered quite simply.   If there is a binding arbitration provision in your contract, or in the supplemental language found in the contract, disclosure document(s), or elsewhere that specifies mandatory arbitration, you will be subject to arbitration if either side requests it.   Note, however, that both parties can agree to waive arbitration and proceed directly to the Courtroom.

Who Interprets Whether the Arbitration Clause Found in My Agreement to Arbitrate is Mandatory?

Generally speaking, the initial determination of whether a matter is subject to arbitration is made by the designated Arbitrator or under limited circumstances by Judge who will decide whether the dispute is subject to binding arbitration.

What are Some of the Benefits and Disadvantages of Voluntary Arbitration?

I know we have covered a lot of information on this Q&A page.  If I can be of assistance, please contact Fredrick P. Niemann, Esq. of Hanlon Niemann & Wright toll-free at (855) 376-5291, or email him at fniemann@hnlawfirm.com to schedule a consultation about your arbitration matter. He welcomes your calls and inquiries.  You’ll find him very approachable and easy to talk to. Fred Niemann has served in the past as an approved New Jersey Mediator by the NJ Supreme Court.