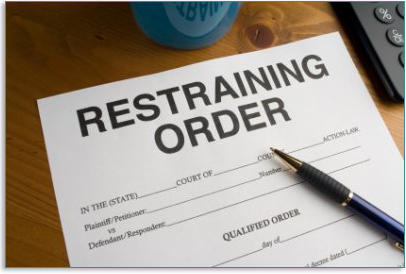 As part of the relief granted by the court, a Temporary Restraining Order can prohibit a defendant from returning to the scene (location) of the domestic violence. The order can also prohibit a defendant from contacting the victim in any manner (i.e. phone, internet, 3rd party surrogates). The victim may request that the court include restraints in the TRO for the protection of other relatives, friends, or co-workers. A court will normally include those names if the victim can demonstrate good cause as part of the hearing process leading up to the TRO.

The Accused May Collect Personal Belongings with Police Supervision

A judge will generally permit an accused defendant to return to the scene of the alleged domestic violence to pick up his/her personal belongings and effects; however, the order granting the relief will generally limit the time and duration of such a visit and often require police supervision during such visit, particularly if the victim is present.

Confiscation of Weapons Owned by the Accused

A Temporary Restraining Order will often prohibit the accused defendant from possessing guns, firearms or other weapons and may order the search and seizure of any known weapons at any location where the judge has reasonable cause to believe a weapon is located provided the judge states with specificity the reasons for, and scope of, the search warrant. Before a weapons search will be ordered, the court must find probable cause to believe that an offense of domestic violence has occurred.

Immediate Service on the Accused

Remember that after the TRO is entered, there is a 10 day requirement for scheduling and holding a hearing on a Final Restraining Order. Once entered, the Temporary Restraining Order (TRO) and the domestic violence complaint must immediately be forwarded by the local police or sheriff department to the county’s family court for service on the defendant.

Failure to Serve the Accused Defendant or Issues of Personal Jurisdiction

If an accused defendant cannot be located for service of the TRO or fails to sign for delivery of certified mail containing the TRO, the court may extend the Temporary Restraining Order until service is actually made upon the accused, which effectively acts as a Final Restraining Order if the defendant is never served. Once an accused defendant has been served, however, he or she is entitled to “due process” which in its simplest terms means an opportunity to be heard and defend yourself before an impartial judge.

Please contact Fredrick P. Niemann, Esq. a knowledgeable NJ Domestic Violence Lawyer today toll-free at (855) 376-5291 or by email at fniemann@hnlawfirm.com. He looks forward to speaking with you.