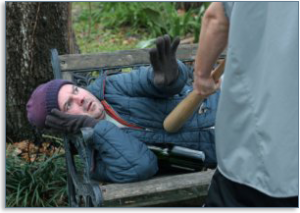 A common misconception most people have about Municipal Court is that the charge is no big deal. Many people believe they do not need to hire an experienced Municipal Court attorney. They are wrong and learn a hard lesson. Along with possible jail time and hefty fines, a conviction for assault will give you a permanent criminal record. This can impact many future aspects of your life, including getting a job, getting into school, the military, and law enforcement and getting a professional license. Don’t leave yourself at risk.

Call us at Hanlon Niemann today and let us work to protect your rights and your pocketbook.

CALL FREDRICK P. NIEMANN, ESQ. TODAY TOLL-FREE AT (855) 376-5291 OR EMAIL HIM AT FNIEMANN@HNLAWFIRM.COM. HIS OFFICE IS EXPERIENCED IN MUNICIPAL COURT AND WILL MEET WITH YOU ABOUT YOUR CASE.

What Constitutes an Assault Charge in New Jersey?

New Jersey Law says a person is guilty of assault if they commit one of three actions:

Did you notice that the law provides that purposely causing bodily injury to someone or attempting to cause bodily injury is considered assault? There is one big exception to this, however, and that is if the assault involves a fight entered into with mutual consent, the matter is to be considered a petty disorderly persons offense.

One must also remember that a conviction for assault can be made by “reckless” or “negligent” actions. Reckless actions refer to those actions where an individual consciously disregards a known or reasonably foreseeable risk of bodily injury. What is and isn’t considered reckless is subjective, meaning it is decided on a case-by-case basis. “Negligent” actions that constitute “simple assault” on the other hand, must involve a deadly weapon, such as a gun, knife or any other object that can cause death or serious bodily injury. Under these circumstances, the individual inflicts bodily harm to the victim under circumstances where the risk is significant and unjustified. The charge and resulting outcome is determined on a subjective basis, making it imperative that you have an experienced Municipal Court Attorney by your side familiar with the elements that constitute simple assault under the laws of New Jersey.

What is the Difference Between a Simple Assault and Aggravated Assault?

Aggravated Assault is Defined as an Action Where an Individual

The assault statutes also include other situations, but the above constitute the basics of the law. One other important note about aggravated assault is that it includes all simple assaults upon cops and certain other government officials. This means that a simple assault automatically becomes an indictable offense if the assault occurs on a government employee listed in the statute.

It is important to know the difference between simple assault and aggravated assault. Many times, prosecutors will charge you for aggravated assault when the facts only warrant a simple assault charge. An inexperienced New Jersey assault law attorney may not pick up on this. It is important to have an attorney who knows the law and is able to apply the law on assault to the specific facts of your case. At Hanlon Niemann & Wright, an experienced attorney can defend you and often help you negotiate a plea deal with the prosecutor and if warranted, plead guilty to a lesser serious charge. Don’t go it alone call Fredrick P. Niemann, Esq. today toll-free at (855) 376-5291 or email him at fniemann@hnlawfirm.com. He’s here to protect you.

What Kind of Sentence Can an Individual Face if Convicted of Simple Assault?

As previously mentioned, simple assault is a disorderly person’s offense tried in Municipal Court. Simple assaults constitute a disorderly person’s offense and sentences include jail for up to six months, probation, a fine of up to $1,000, and additional surcharges. If the charge is for an aggravated assault, the length of sentence and fine amounts are subject to a significant increase.

Simple and Aggravated Assault cases are one of the many challenging areas of Municipal Court. Not only are there different degrees of assault, but different penalties, fines and prison terms applied for each. Please call Fredrick P. Niemann, Esq., a knowledgeable NJ Municipal Court Simple Assault Attorney today. He can be reached toll-free at (855) 376-5291 or by email at fniemann@hnalwfirm.com. He looks forward to speaking with you.