Do You Need a Municipal Court Attorney to Defend You Against a Resisting Arrest or Obstruction of Justice Charge?

Some of the most common crimes heard by Municipal Courts throughout New Jersey are resisting arrest and obstruction of justice. As one can imagine, these crimes pop up frequently since they deal with police arresting individuals. When one is arrested, they often are influenced by their 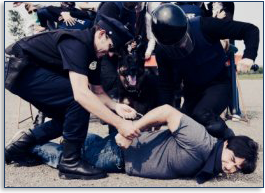 adrenaline and act impulsively. This can involve running away, physical resistance, or any other type of action to avoid being detained or arrested. This can also happen when you simply do not know how to react to being detained and make the mistake of resisting. Unfortunately, police and prosecutors are often not forgiving about these types of charges and elect to charge resisting arrest and obstruction of justice charges on top of whatever charge you were originally being arrested for. Fortunately, the attorneys at Hanlon Niemann understand your situation and are here to help. We have experience in defending all types of Municipal Court charges, including resisting arrest and obstruction of justice charges.

What is the Difference Between a Resisting Arrest Charge and an Obstruction of Justice Charge?

Both resisting arrest and obstruction of justice charges tend to be supplemental charges, meaning they are charged in addition to the original offense you were arrested or summoned for. Both charges are considered disorderly persons offenses at their most basic form, although they can be upgraded to more serious, indictable crimes if certain aggravating factors are present. Assuming the offense is not upgraded, it will be tried in municipal court. They will likewise have similar consequences if convicted.
As for the actual crimes, they can differ somewhat. Resisting arrest obviously deals with you preventing or attempting to prevent the police from apprehending you. Obstruction of justice is a much broader charge. It deals with the obstruction of all law enforcement activities. This includes the police apprehension of suspects and police investigations, as well as other government officials performing their official state responsibilities. As one can imagine, obstruction of justice can be charged under a number of circumstances. While the charges may differ, the implications of both charges are similar and potentially severe. It is therefore important to avoid a conviction for resisting arrest or obstruction of justice when possible.

What Actions Are Considered Resisting Arrest Under New Jersey Law?

As previously discussed, there are different levels of resisting arrest charges under New Jersey law. The statute covers all of the different levels of the offense. The most basic form, heard in Municipal Court, is a disorderly persons offense. New Jersey law states, “a person is guilty of a disorderly persons offense if he or she purposely prevents or attempts to prevent a law enforcement officer from effecting an arrest.” This encompasses the most basic resisting arrest charges that do not involve running from the police or using physical resistance. Physical resistance and evasion are considered aggravating factors, which the statute also addresses. If any of the aggravating factors listed in the statute are present and you are charged with the more serious fourth-degree or third-degree resisting arrest offenses, the case will be heard in New Jersey Superior Court, not Municipal Court.

These more serious charges are considered indictable offenses, meaning you must be indicted by a Grand Jury before you can be charged. They involve much greater consequences and because of this, guarantee you the right to a trial by jury if you choose. A Fourth Degree Resisting Arrest offense is the next most serious offense after a disorderly persons offense venued. The New Jersey statute states “a person is guilty of [resisting arrest in] the fourth degree if he or she, by flight, purposely prevents or attempts to prevent a law enforcement officer from effecting an arrest.” This obviously is more serious than a simple disorderly persons offense, but is not as serious as a Third Degree offense, which is the most serious charge to be made under the New Jersey resisting arrest statute.

It is important to remember that there are multiple elements to the charge that the prosecutor must prove in order to convict you of Resisting Arrest, no matter what the degree or resistance or obstruction. The prosecutor must prove each of the aggravating factors in order to convict you of a Third or Fourth Degree. A skilled Municipal Court attorney knows that you will be found not guilty if the prosecutor is unable to prove each and every element of the charge. An experienced attorney will focus on the elements that must be shown for disorderly persons resisting arrest charges; The prosecutor must clearly establish an attempt by a police officer to make an arrest the police officer was acting within the law and announced his intentions to arrest the defendant, there was resistance or attempted resistance by the defendant, and the fact that the resistance was intentional. At its simplest form, resisting arrest sounds straightforward, but when making the statute into its basic elements it is clear that a knowledgeable attorney may be able to take advantage of failed proofs to the multiple elements of the charge.

What Exactly is Obstruction of Justice Under New Jersey Law?

The broader of the two statutes are discussed on this page, Obstruction of Justice laws deal with the general impairment or obstruction of official law enforcement or other government actions. New Jersey officially refers to this as “Obstructing the Administration of Law or Other Governmental Function”. Similar to NJ law on resisting arrest, obstruction of justice law allows for aggravating factors to increase the crime from a disorderly persons charge to an indictable offense.

For the Disorderly Persons Offense, the Statute States:

A PERSON COMMITS [DISORDERLY CONDUCT] IF HE PURPOSELY OBSTRUCTS, IMPAIRS OR PERVERTS THE ADMINISTRATION OF LAW OR OTHER GOVERNMENTAL FUNCTION OR PREVENTS OR ATTEMPTS TO PREVENT A PUBLIC SERVANT FROM LAWFULLY PERFORMING AN OFFICIAL FUNCTION BY MEANS OF FLIGHT, INTIMIDATION, FORCE, VIOLENCE, OR PHYSICAL INTERFERENCE OR OBSTACLE, OR BY MEANS OF ANY INDEPENDENTLY UNLAWFUL ACT.

Obviously, this statute is relatively broad, allowing prosecutors the discretion to charge it in a number of circumstances. As previously mentioned, it is typically used as a supplemental charge by prosecutors against persons that did not cooperate with their arrest.

The statute provides that the charge will be upgraded to a Fourth Degree offense, “if the actor obstructs the detection or investigation of a crime or the prosecution of a person for a crime, otherwise it is a disorderly persons offense.” Upgrading the charge to an indictable offense means it will be brought up to the New Jersey Superior Court Criminal Division with the right to a jury trial and will involve more significant consequences. An experienced attorney is aware of what types of conduct have traditionally been found in the Courts to be considered obstruction of justice and which haven’t. With such a broad statute, it is important to have a knowledgeable attorney that knows the best plan to defend your case, whether it be defending against a single element of the charge as described earlier or negotiating a plea deal with the prosecution to downgrade your Fourth Degree offense to a disorderly persons offense. Quality representation is a key part of truly looking out for your best interests.

What Potential Penalties Does a Defendant Face if Convicted of Resisting Arrest or Obstruction of Justice?

Municipal Courts, hearing disorderly persons offense charges of both Resisting Arrest and Obstruction of Justice can impose the maximum jail sentence for either of these charges of six months. In addition to a potential six months incarceration, a guilty defendant may also be subject to a fine of up to $1000, court costs and fees, community service, and other similar penalties.

For Resisting Arrest and Obstruction of Justice charges that are upgraded to fourth-degree crimes due to aggravating factors, an 18-month jail sentence is possible. The Superior Court can also assess fines, fees, and community services, similar to the Municipal Court. For Resisting Arrest, if the offense is upgraded to a Third Degree Offense, you will be subject to five years in prison if convicted. It is also important to note that Superior Court Judges will take certain aggravating (ex. multiple offenses) and mitigating (ex. active in the community) factors into sentencing in determining the appropriate penalties for a guilty person.

If convicted, you will be branded with a permanent record, arguably the most significant consequence. This means that whenever an employer, school, or other service checks your criminal record, they will see either a resisting arrest or obstruction of justice conviction. Obviously, this can significantly impede one’s chances of getting the job they want or getting into the school of their choice. This is yet another reason why it is important to properly defend yourself against these criminal charges.

Resisting arrest and obstruction of justice are two of the most common laws charged in Municipal Courts throughout New Jersey. It is important to have an experienced, qualified attorney by your side to ensure that you present your best defense forward in order to avoid being convicted of these serious crimes.

Please call Fredrick P. Niemann, Esq., a knowledgeable NJ Municipal Court Attorney today. He can be reached at (855) 376-5291 or by email at fniemann@hnlawfirm.com. He welcomes the opportunity to meet with you.