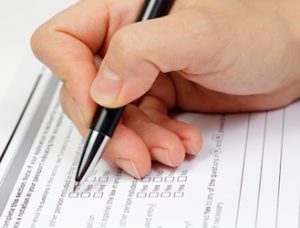 I’ve commented about the case of a resident denied Medicaid because in her Medicaid application she listed a Minor’s Account as a resource.   In this case, the client provided the Medicaid caseworker five (5) years of financial records and was told that his father (Granddad) still had to spend down the balance of $30,000.00 from a 529 account that the applicant never knew existed.

Upon further review of the statements given to Medicaid, it was clear that the $30,000.00 in question was in two (2) Uniform Transfer to Minors accounts, which the applicant/grandparent was acting as custodian for his grandchildren.   She was asked why she gave those documents to Medicaid but she didn’t have a good answer.   “I just figured I would give them everything and they would tell me when he would be eligible and what I needed to do”, she replied.

It’s a very common response.  Many people are under the erroneous belief that the Medicaid application process is a simple one.  “I know there is a penalty if we gift money but we haven’t done that.  We have legitimately spent down all the assets:  The family’s mistaken belief was that they could  just walk into the Medicaid office and tell the county worker that they had handed over everything and all should be fine.”  Unfortunately, it rarely works out that way and what you don’t know can really hurt you.  You can’t rely on a caseworker no matter how well intentioned.  That was the case here.

You see, when Dad set up the UGMA accounts 20+ years ago, when his grandchildren were young, he irrevocably transferred the money into those accounts for their benefit.  He remained a custodian of those accounts until each child reached 21, entrusted to manage those funds for his/her benefit.  For Medicaid purposes, those funds were no longer Dad’s so they shouldn’t be counted as his.  The caseworker was wrong to tell her to cash out the accounts and spend down the funds for Dad.

What the daughter needed to do now was to transfer those accounts to her name.  She was now forty five (45) years old so that should have happened twenty four (24) years ago.  She was told that under the UGTA law she was entitled to access those accounts.  And if you’re wondering whether the transfer to an account in her name will cause a Medicaid penalty, the answer is “it does not”.  That’s because, again, the money was transferred out of Dad’s name more than five (5) years ago so it wouldn’t fall within the Medicaid look back period.

In fact, Dad was taking the interest all these years, some of which went towards paying for his long term care in his later years.   In other words, some of what was legally the grandchild’s money went towards Dad’s care so Medicaid shouldn’t complain about that.

In this case, we will speak to the New Jersey Medicaid caseworker and explain the situation.  At first, she will insist that the money is Dad’s but when we follow up with a letter citing the applicable law she will refer it to her supervisor and several months later the client will receive a favorable decision.

The result is the grandchildren will be able to keep the $30,000.00 and Dad will be approved for Medicaid.  The mistake she made was that she gave Medicaid too much information.  She didn’t know what the initials “UGTA” meant.”  Her mistake was in relying on the state to steer her in the right direction.

Contact me personally today to discuss your New Jersey Medicaid application.  I am easy to talk to, very approachable and can offer you practical, legal ways to handle your concerns.  You can reach me toll free at (855) 376-5291 or e-mail me at fniemann@hnlawfirm.com.