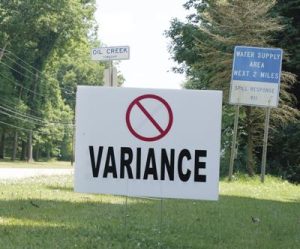 The trial judge disagreed with plaintiff’s contention that the city did not make any findings regarding plaintiff’s economic inutility (loss of economic benefit) argument.  The court reasoned:

Property Owner’s (PO) position that the board did not make reasoned findings as to their economic inutility argument which is the basis for owner’s positive criteria or “special reasons” under the statute is without merit.  Stated succinctly, the owner argues that the parcel is rendered useless for any permitted use, therefore the highest and best use is as a site for a billboard.

Indeed, special reasons may be found to exist when denial of the variance application would visit an undue hardship on the applicant or result in economic inutility of the property.

In this case, the board argued against the economic inutility argument by reasoning that the hardship argument is not available to this applicant since it is dependent upon how the hardship or inutility was created.  The board cited the insufficiency of the applicant’s proofs to show that the hardship was self-created. They argued that without a complete record regarding how this irregularly shaped lot was created, the owner has a fatal failure of proof . . . .  The board asserted that, without evidence that the inutility was not created by the landowner, the hardship argument fails.  It is on that basis that the positive criteria were evaluated against the owner.

Statement About the Law of Economic Inutility

It is well-settled that a “self-created hardship” nullifies any variance application based on a hardship under N.J.S.A. 40:55D-70(c).  Moreover, when an applicant presents to a local zoning board of adjustment with a hardship application, the fact that the applicant may not know or cannot establish the title history or trace the origin of the non-conforming aspect of the property (1) is not, in and of itself a hardship and (2) can be fatal to the application. . . .

In this, the property owner through no fault of its own, could not establish the manner in which this piece of land was transformed into a triangular, small lot that exists today.  Reasonable inferences allow a fact finder to conclude that the property was likely subdivided by prior owners.  As such, . . . the owner’s application was properly found ineligible for hardship treatment due to an inadequate record.  The court concluded that Jersey City’s determination was neither arbitrary or capricious.