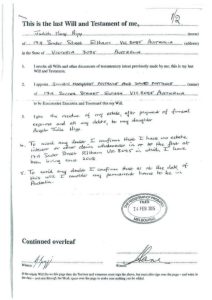 A recent inquiry to my office illustrates the risks of a “do it yourself” last will.  Here, the person used a common will software program purchased online for less than $100.  A reasonably priced estate attorney would have charged several hundred to a few thousand dollars, depending on the particular needs of the client and level of detail needed to make it work.  Clearly, the less expensive move was to go with the software program.

As I always point out, however, this way of viewing a will – as a fill in the blanks document – without proper legal advice from a lawyer who understands the laws of wills and particular client’s needs and desires can cost the client a lot more money in the end.

The caller (“Mary”) advised me her spouse had recently died and she needed to probate his will.  When I read the will, I saw many mistakes.  Big mistakes.  First, the will contained a paragraph specifically referencing IRAs and 401ks.  For tax purposes, these accounts typically have beneficiary designations upon death with the spouse or beneficiary, not here.

I found out that the decedent had previously been married.  Upon further inquiry, I learned that he named his son from his first marriage as the beneficiary.  Although he wanted all IRAs to be distributed to his second spouse, he failed to update the IRA beneficiary designation before he died.  This mistake cost her about $100,000.

Even worse, for Mary was that her husband’s will contained a residuary clause which stated that the rest of the husband’s property was to be distributed to the children from his second marriage, his and Mary’s children.  He apparently used Mary’s will as a sample and then took her will and changed the names when preparing his own will.

Mary was quick to point out what he intended and I didn’t disagree with her assessment.  However, we can’t substitute our own belief as to what he intended.  So, what now?

I told her that once we probate the will we would need to apply to the court for an advisory opinion allowing us to simply distribute everything to her.

So what’s the lesson to be learned?  In this case, the legal fees for a quality last will would most likely be a few thousand dollars.

Mary then asked whether she would receive everything if the will is deemed invalid.  I had to tell her that under the intestacy laws of NJ (these are laws that determine what happens to assets if a person dies without a will), her late husband’s estate will be distributed to many beneficiaries and she will not receive everything because not all of her husband’s children are hers.  Some of his estate will go to the child from his first marriage.

To discuss your NJ estate planning matter, please contact Fredrick P. Niemann, Esq. toll-free at (855) 376-5291 or email him at fniemann@hnlawfirm.com.  Please ask us about our video conferencing or telephone consultations if you are unable to come to our office.