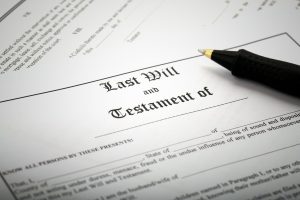 Traditionally, a deceased person either left a Will or was intestate, meaning they passed without leaving a Will.  New Jersey requires that Will be a written document signed by the testator and witnessed by two adults.  Formally, a Will that has not been signed by the testator is not a valid Will, even if the testator were to hypothetically die, pen-in-hand, partway through a Will signing session.   Fortunately, New Jersey courts have been departing from strict formality and, under the “probable intent” and “substantial compliance” doctrines, a non-conforming Will can at least be submitted for the Court’s consideration toward the goal of being found valid after all.

When a Court reviews a non-conforming Will, such as one that is not signed, one that is handwritten, one that is a copy instead of an original, one where the two witness signatures are lacking, and so on, the Court requires the person advancing the Will to prove by clear and convincing evidence that the Will was reviewed by the decedent and that the decedent gave his or her “final assent” to it.  The phrase “clear and convincing evidence” refers to a more difficult burden than in a regular civil case, though it is a lower standard than “beyond a reasonable doubt” in a criminal case.

“Final assent” is established differently depending on the case.  Sometimes correspondence between the attorney and testator tends to prove the decedent’s wishes as to an unsigned document.  Sometimes a copy truly is as good as the original.  There are cases in which handwriting experts can establish that a document was written by the testator, the argument there being that self-authorship would tend to reliably prove the testator’s final wishes.  In some cases, witnesses have signed in the wrong places, a careless but common mistake that tends not to weigh against the testator’s confirmation of the contents of the Will.

The 2020 COVID-19 epidemic resulted in amendments and relaxations to the normal operating rules for estate document preparation.  Wills and other documents could be signed in the electronic presence of a notary or attorney if the adapted rules were followed.  It is critically important that even though the traditional rules are being relaxed in favor of new virtual rules, the new rules must be followed exactly.  For example, the virtual signing session must be recorded.

In any of these cases where a Court rules that a non-conforming Will should be admitted to probate, the process always takes longer and costs more than if the testator would have been able to prepare a Will correctly, ideally with the help of counsel.