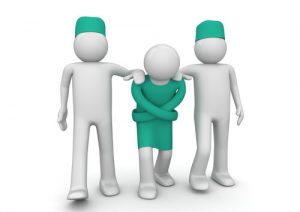 The mother was admitted into a hospital with a history of having given birth to her first child within the month.  Since then, she had been “agitated”, and was observed to have thrown vases and cable boxes against the wall.  During her hospital admission, a psychiatrist diagnosed her with psychotic disorder, not otherwise specified.  He noted the Division of Child Protection and Permanency were involved in the baby’s care because of her behavior.

Although the doctor testified that he had observed her “acting really bizarre” while in the hospital, which took the form of the mother’s “laughing for no reason,” on the day before the hearing, he thought she “wasn’t that sick, [and] questioned why she was brought to the hospital.”  Despite the latter statement, he testified he had a concern for both the mother and her newborn.  He commented:

I believe she’s… not in her right mind to provide the child with the care that the child needs.  She is at risk of losing the child if she continues to behave the way she did.  And I’ve just started her on the anti-psychotic medication that… needs to be adjusted before she’s stable enough to go home.

He recommended that the mother continue to be committed, but that the court hold a review hearing in two weeks.

Without making any findings of fact or conclusions of law, the court ordered that the mother’s involuntary commitment continue another two weeks.

The patient/mother made a number of contentions, including that the doctor had not been qualified as an expert medical witness before he testified, and that he did not state it was probable she would be a danger to others if released from involuntary commitment.  The mother argues either one of these omissions requires the reversal of the court’s order.

“Dangerous to self” is defined as:

NJ court rules require that a witness who testifies on a subject matter beyond fact-finder possess sufficient expertise to offer the testimony.  Before such witness may testify, the court must establish the witness has the requisite expertise about such specialized knowledge.

In addition, when seeking a final order for involuntary commitment, the state’s application must be supported by the oral testimony of a psychiatrist.

As stated, to involuntarily commit a party, the state must prove a party is afflicted with a mental illness that causes the party to be dangerous to himself, others, or property.  Generally, such proof requires medical expert testimony.  Here, the patient’s attorney did not stipulate that the medical doctor was qualified to testify as an expert in this matter.  Thus, the state was required to introduce evidence of his qualifications and the court was obligated to make a finding about them.  As a result of the state’s omission, the court could not make the requisite findings.  There is not even any evidence he was a psychiatrist.

The failure to testify it was probably plaintiff was a danger to others and the fact he was not qualified to testify as an expert witness compelled the court to reverse the trial court’s order.

To discuss your NJ guardianship and civil commitment matter, please contact Fredrick P. Niemann, Esq. toll-free at (855) 376-5291 or email him at fniemann@hnlawfirm.com.  Please ask us about our video conferencing or telephone consultations if you are unable to come to our office.