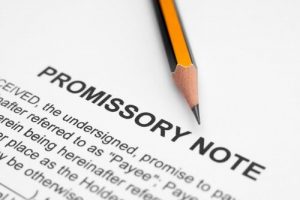 Older persons often have their liquid assets tied up in real estate, mutual funds and annuities.  They cannot gain access to these funds quickly to pay for renovations to a house to make it more senior friendly or for other reasons.  To make sure that Medicaid does not question why loan proceeds were paid to a child, promissory notes are a good idea to memorialize the debt and payback schedule.  When evaluating a promissory note, Medicaid is very strict and looks to see if the money was loaned and paid back.  If not, they will penalize these transfers and cause the applicant to lose Medicaid.

The Director of the Division of Medical Assistance and Human Services, which administers Medicaid in New Jersey, found that the renovations were made to solely benefit the applicant’s son as the subsequent owner of the property, and rejected the argument that the residence was transferred to satisfy the promissory notes.  He first rejected the promissory notes as legitimate because the notes were “undated documents with a signature that is not notarized” and that they were “silent on [the son’s] equity interest in the home and [did] not permit [the applicant] to satisfy the obligation by transferring title of the home.  Rather the notes require her to make payments on the balance at 6% interest.”  Id. at *2.  Because the record was silent as to “what precipitated an allegedly competent, eighty-four-year-old woman to transfer title to her home at that point in time and where she intended to live as she no longer owned the home,” the Director concluded that insufficient evidence was presented to rebut the presumption that the residence was transferred for a reason other than to qualify for Medicaid, and upheld the penalty period for benefits.

This case presents an important lesson about keeping good records, because if you do loan money to a loved one so you can get paid back, you need to make sure you keep copies of the checks, not only of the money being paid back, but also when you disburse the money.  Your good deed could otherwise be for naught if you aren’t careful.

To discuss your NJ Medicaid Eligibility matter, please contact Fredrick P. Niemann, Esq. toll-free at (855) 376-5291 or email him at fniemann@hnlawfirm.com.  Please ask us about our video conferencing consultations if you are unable to come to our office.