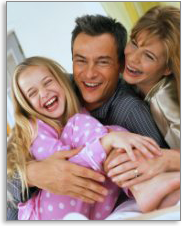 New Jersey Law says you are either legally adopted or you are not.   There is no In-Between.  There is no shortage of interesting cases under the law of adoption(s) and probate estate litigation.   You may think of an adoption as a straightforward proceeding involving adoptive parents, biological parents and the exchange of legal rights to parentage.

Adoptive children have the same legal rights as natural born children to the Estate of his or her adoptive parent.   Sometimes, however, you get a really interesting case which examines the death of a biological parent and the inheritance rights of his biological child who was never formally adopted but raised as if he was the biological child of a step-parent.  In this case, when the biological father died, all hell broke out.

In this appeal, the court considered and rejected an argument that a biological child of a person who died without a Last Will or Trust could be deprived of his inheritance through the application of the “equitable adoption theory” because that child was born after his mother married a man other than the child’s biological father.

The circumstances of the case are a bit convoluted.   Mother (EM) ended a two year relationship with a man (GA Sr) but then married someone else (AB) two months later in 1977.  EM gave birth to a child seven months later.  That child was named GA Jr. and his birth certificate declared that AB (stepfather) was his father, even though AB knew he did not father the child.  The biological father (GA Sr) knew that he fathered the child.

EM and AB separated less than three years later and were divorced by 1983.  AB remarried and he and his second wife had two children.  He died in 1995.

EM never remarried and she alone raised GA Jr.  She didn’t reveal to GA Jr his biological natural parent until 2008, when GA Jr was thirty years old. GA Jr. knew about his biological father because his mother and he rekindled their relationship shortly after her divorce but their renewed romantic relationship ended soon after it began.

At age 30 and when told the news about his birth father, GA Jr. was stunned; although resistant, he eventually commenced a casual relationship with his biological father that consisted of only occasional telephone calls and even fewer visits.   It is fair to assume that a true psychological/parental relationship never came into being.  GA Jr was by then a young adult, pursuing an acting career, and living in New York City, well beyond the sphere of influence of any of these adults.   At his deposition, he explained the strangeness of the circumstances, his devotion to his acting career, and his father’s unique peculiarities stood in the way of the formation of something more than a casual relationship with him GA Jr’s biological father (GA Sr) was murdered in 2016, without a spouse or other children.  He also died without a Will.  A blood sample established that he fathered GA Jr.

Decedent’s siblings applied to be the Administrator of their brother’s Estate, but GA Jr. filed a caveat and a lawsuit was soon commenced.  It ended with a Summary Judgment that declared GA Jr was the only legal descendant and alone entitled to his father’ estate under the laws of New Jersey Intestacy.

In appealing, the siblings argued that the Judge should have permitted additional discovery, which they deemed crucial to the case.  They also contend that the Judge failed to give sufficient weight to N.J.S.A. 9:17-43(a)(1), which declares that “a man is presumed to be the biological father of a child if (h)e and the child’s biological mother are or have been married to each other and the child is born during marriage…”

The Appeals Court found no merit in these contentions and affirmed the trial court.  The biological son won the case.

To discuss your NJ Estate Probate and Estate Litigation matter, please contact Fredrick P. Niemann, Esq., toll free at (855) 376-5291 or email him at fniemann@hnlawfirm.com.   Please ask about our video conferencing consultations if you are unable to come to our office.