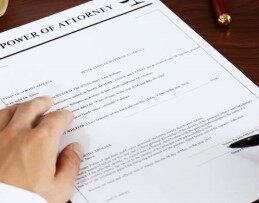 You’ve heard of buyer’s remorse. What seemed like no big deal becomes more than expected and so the Power of Attorney gives up and resigns. So what happens next?

The resignation of the named agent under a signed Power of Attorney document is a problem and will almost always impact and delay the daily life and financial affairs of the person who has depended on that agent. Legally, the resigning agent should turn over the records, the keys, the passwords, and everything that’s in their possession and used to help the person benefit from the Power of Attorney. An orderly transition is important.

The next-named agent in the document will want to get a signed Letter of Resignation to show to the various entities s/he has to deal with. It also will probably be necessary for this successor agent to sign an Affidavit of Full Force and Effect to provide assurance to the bank, brokerage, etc. that the principal is still alive and the Power of Attorney has not been revoked and is “still in full force” and still has “legal effect”.

Here’s the actual statute, which can be quoted to the financial institution if the successor agent runs into a problem like this. Sometimes the New Jersey Power of Attorney will run into resistance, most likely from a bank. New Jersey has a statute that can help in such a situation. N.J.S.A. 46:2B-8.6: Good faith reliance. The statute reads:

I always tell clients this is the law and then there is the real world. If you are involved in a situation like I described above, call me and let’s discuss. Call toll-free (855) 376-5291 or email me at fniemann@hnlawfirm.com. Please ask us about our video conferencing consultations if you are unable to come to our office.