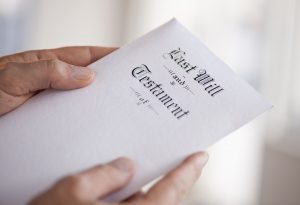 It happens all the time. Mom or Dad dies and their children find out that their parents estate passes to a second spouse (who they generally don’t like or tolerate). Instead of being a beneficiary they are on the outside looking in.

In most cases, Mom or Dad’s Will provides that upon the second spouse’s death their estate goes to their children (namely you). But guess what happens?

This article discusses the major causes of action that can be filed against the estates of stepparents. Is there anything you can do? Below are some claims that can be made, the success of which depends on the facts. Read each possible claim over and call me if you think you have a case.

Contract to Make a Reciprocal Will

However, the law further states that the mere existence “of a joint Will or mutual Wills does not create a presumption of a contract not to revoke the Will or Wills.”

A reading of both sets of Wills must establish provisions that can be interpreted as a contract to make reciprocal Wills and require that both parties name children as the intended and sole beneficiary, not ever to be changed in the future.

Compliance with the Formalities of a Will Execution

One possible claim is whether the Will complies with the formalities required under the law (a writing signed by the testator in front of two witnesses, notarized to make it self-proving). This means was the Will signed and witnessed according to the formalities of NJ law.

Was the Deceased Person Competent When the Will Was Signed?

Was the testator incapacitated or impaired at the time the Will was signed? Perhaps he or she experienced an “insane delusion” at the time of the Will signing. This cause of action has been recognized as grounds to challenge a Will. A delusion has been defined as a “false, fixed belief, based on supposed facts that exists only in the imagination of the person and persists despite indisputable evidence of its falsity. This delusion must have existed at the time of the execution of the Will. Courts have held that an insane delusion does not exist where the testator was mistaken on facts, such as whether the testator’s child is still alive or had a mistaken conclusion arrived at based on the consideration of existing facts.

Fraud has also been recognized as a cause of action in a Will contest, though again not as prevalent due to undue influence being a form of fraud that is contested. Fraud is defined in two forms – fraud in the execution, where a testator is manipulated to sign a document other than the document he thought he or she was to be signing or it include(s) words in the Will he or she never thought of being included in the document, or fraud in the inducement, which is when a testator relies on a knowing and purposeful misrepresentation by another person when executing a Will that he or she thought was another document (i.e., a purchase order for personal property).
Forgery of the testator’s signature is another possibility. Here, you would need to get a handwriting expert or testimony of people close to the testator that could attest to the signature being a forgery.

Mistaken Identity of the Document

A final cause of action is mistake in the execution or inducement of a person signing a Will, or a mistake as to the contents of the Will. Examples of mistakes are when a testator signs the wrong person’s Will, or as mentioned earlier, believing a child to be deceased when executing the Will omitting that child even though he or she is still alive. In such an example, the Court would likely reform the Will using the probable intent of the testator at the time the Will was made. In the latter case, an unintentionally omitted child would get a share of the Estate he or she would have gotten if not forgotten by the testator. N.J.S.A 3B:5-16.

The problem with these causes of action is that most times these types of arguments have not worked in Court versus the number of times the arguments did work in court. Like arguing a case of “lack of capacity” or “undue influence”, it is hard to show a Court that the testator was under an insane delusion, or was defrauded by someone when his or her Will was executed. The benefit of an undue influence argument is the presumption framework the Court created that makes it easier for a finding of undue influence, in part due to it lowering the evidence standard form clear and convincing evidence to preponderance.

To discuss your NJ probate litigation matter, please contact Fredrick P. Niemann, Esq. toll-free at (855) 376-5291 or email him at fniemann@hnlawfirm.com. Please ask us about our video conferencing consultations if you are unable to come to our office.