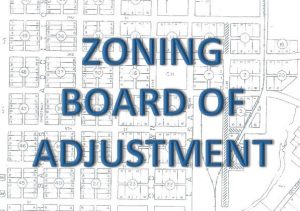 Plaintiffs’ home was substantially damaged by Hurricane Sandy in 2012. In 2013, the home was elevated three feet and a rear deck adjacent to a water lagoon was reconstructed and elevated by two feet. The contractor hired by plaintiffs represented that all work was done in compliance with the permits; however, plaintiff later discovered that the contractor had not built the deck, hot tub and awning in compliance with the construction permit and approved plans. According to plaintiffs, they were unaware of the deviations because the contractor stated that everything was being built in accordance with what was permitted. The alterations ultimately forced plaintiffs to seek zoning variance relief to legitimize the improvements so plaintiffs could obtain a certificate of occupancy.

The Municipal Board of Adjustment held a hearing regarding plaintiffs’ application. The Objectors urged the Board to deny plaintiff’s application because the improvements compromised their privacy and represented a “self-created” hardship.

The Board approved several variances; however, the Board denied the variances related to the location of the hot tub and the awning over the deck. The Board concluded that plaintiffs were not entitled to consideration of a hardship variance, because any hardship was self-created. When analyzing the application pursuant to N.J.S.A. 40:55D-70(c) (2), the board found that plaintiffs failed to establish the positive criteria for a (c) (2), or “flexible c,” variances, which allows for a variance. A flexible (C)(2) variance requires;

“Where in an application or appeal relating to a specific piece of property the purposes of this act…, would be advanced by a deviation from the zoning ordinance requirements and the benefits of the deviation would substantially outweigh any detriment, grant a variance to allow departure from regulations pursuant to article 8 of this act; provided, however, that the fact that a proposed use is an inherently beneficial use shall not be dispositive of a decision on a variance under this subsection.”

Plaintiff filed a lawsuit to challenge the Board’s denial of variance relief for the hot tub and the awning.  This appeal is called an “Action in lieu of prerogative writs. ” It’s a comprehensive judicial action against official wrong,” that allows a citizen to challenge a municipality’s action or inaction.

When filing an appeal from a zoning board decision an applicant bears the burden of establishing that particular conditions of the land create a hardship to him/her. Hardship, under (c) (2), “refers solely to the particular physical condition of the property, not personal hardship to its owner, financial or otherwise.” Applicants for a variance under (c) (2) must also satisfy the “negative criteria;”

To discuss your NJ Zoning Board Appeal case matter, please contact Fredrick P. Niemann, Esq. toll-free at (855) 376-5291 or email him at fniemann@hnlawfirm.com.  Please ask us about our video conferencing consultations if you are unable to come to our office.