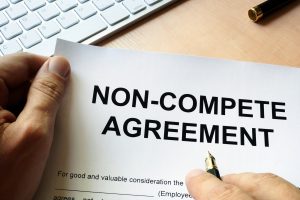 The Federal U.S. Court of Appeals for the Third Circuit (which covers NJ) ruled that upper management employees of ADP, a payroll processor company who clicked a box on a company website after reading terms of the company’s stock award program are bound by those terms, which include a non-compete clause.

The Court rejected the claims of these former employees that the website’s statement that “you must select the checkbox to indicate you have read all associated documents before you can proceed” only indicated that they had read the terms, but had not agreed to be bound by them.

According to the Court,  the terms of the non-compete clause explicitly set forth and disclosed that a condition of employment and accepting stock options offered to them was a clear and unambiguous statement of the condition of employment.  The facts established that the plaintiffs also clicked another box labeled “accept grant”.  As a result, the District Court concluded that the defendants agreed to be bound by the terms.

The Court granted ADP’s request for an injunction barring the plaintiff from soliciting current and former ADP clients when they jointed the competitor to enforce the non-compete clause.   When a party enters into a signed, written contract, that party is presumed to understand and assent to the terms, said the Court.

To discuss your NJ appeals matter, please contact Fredrick P. Niemann, Esq. toll-free at (855) 376-5291 or email him at fniemann@hnlawfirm.com.  Please ask us about our video conferencing consultations if you are unable to come to our office.