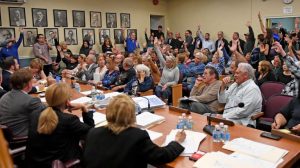 In a land use and Zoning Board hearing,  applicants often amend, withdraw and resubmit applications to address concerns raised by neighbors, board members and objectors.  An applicant may modify or withdraw an application to address such concerns without being exposed to significant out of pocket expenses incurred by objectors and others who oppose the application.  To allow imposition of fees and costs against an applicant defeats the purposes of the Municipal Land Use Act and other enabling statutes.

The New Jersey Land Use Act and other regulations state as one of its primary goals the promotion of development in an orderly and publicly harmonious way.  In this case, the adoption of the objector’s position would be antagonistic to development and would likely discourage future applications which are not in the public’s best interest.

A recent case is instructive to those concerned about withdrawing an application before a public body, especially a Zoning Board judgment.   They would not be able to reapply before the Board.

In this case, objectors petitioned the government agency to order the applicant to pay for their professional fees, expert costs, etc. in opposing the application.  The public agency denied the objector’s request and an appeal was filed.

What is interesting about the case is that the objectors relied upon a New Jersey Superior Court Rule to justify an award of fees and costs in an administrative hearing.  In all of my years, I have never seen a recital made to a rule governing the Courts in an administrative non-judicial matter.  Apparently, the Appellate Division felt the same way.  It could not find any authority binding upon the Court who supported the argument that a withdrawn application subjects the applicant to payment of an objector’s out of pocket expenses.

To discuss your NJ land use or Zoning Board matter, please contact Fredrick P. Niemann, Esq. toll-free at (855) 376-5291 or email him at fniemann@hnlawfirm.com.  Please ask us about our video conferencing consultations if you are unable to come to our office.