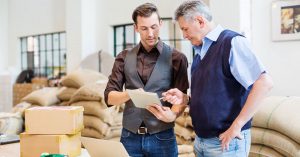 A case in our office centered around a shareholder dispute between two brothers who formed a successful company over ten (10) years previously  but whose present vision and strategy for the company’s future became diametrically opposed, resulting in a deadlock, and necessitating the buyout of one of the brothers’ interest or the dissolution of the company.  Here are the facts of the case and the law recited in our brief to the court requesting injunctive relief.

In the 1990’s two brothers, Richard and Vincent (I have removed their last names and the company name for privacy reasons), formed X, Inc., a New Jersey Corporation. Its principal place of business was in New York. Richard and Vincent were each fifty (50%) percent owners.  The corporation’s principal business was litigation support services to law firms (ironic isn’t it). These services include scanning, coding, printing, microfilm and technology consulting.  The general understanding between the shareholders when X, Inc. was formed was that Vincent would sell and market its services, and Richard would handle the production, accounting, financial, administrative and personnel aspects of the business. Richard and Vincent successfully operated X, Inc. in this fashion until the shareholders began to struggle with each others decisions.

Vincent’s vision for the company was to borrow every available dollar and utilize all available capital to expand the company at an exponential rate.    Richard felt this to be risky, requiring capital that X, Inc. did not have.  Nor did X, Inc. have the personnel or expertise to support the business, he said.  It appeared from an online search of its website that Vincent unilaterally decided to offer the electronic discovery service its customers without Richard’s consent.

Richard wanted to maintain the current operations of the company and grow at a much slower rate so as not jeopardize the existing structure of the company and allow the shareholders to be compensated for the value of the work they were performing.

When it became obvious that the shareholders would not be able to resolve their differences, they decided that Vincent would buyout Richard’s interest, subject to certain contingencies. The parties contemplated an interim business relationship. Richard caused to be prepared a Memorandum of Understanding (hereinafter “MOU”)as to how the shareholders would act while Vincent proceeded with the buyout of Richard’s interest; the parties realizing that it would take Vincent some time to raise the necessary capital.  The MOU reflected the shareholders’ desire to maintain the status quo of the company including operations during this transition time memorializing in essence the shareholders roles, over the past seven or eight years.

In preparation for the buyout, defendants’ counsel drafted a stock purchase agreement which the shareholders continued to negotiate when the shareholders again reached an impasse.  One of Richard’s main concerns with the buyout was his release from a personal guaranty in connection with the office lease of Vincent and his counsel assured Richard that he would be able to obtain the release through the landlord and that he would immediately seek to obtain same. After receiving Vincent’s assurances, Richard, in good faith and at Vincent’s request, agreed to have less to do with the business in preparation for Vincent’s takeover.[1] On or about December 22, 2004, Richard learned from the landlord that Vincent had never even contacted the landlord in an effort to have Richard released from the personal liability guaranty. At Richard’s request, the landlord provided Richard with a list of the items necessary to make such an application.

Thereafter and in violation of the MOU and the agreement between the shareholders, Vincent advised Richard that Vincent had issued instructions that X, Inc. cease paying Richard his payroll and distributions effective immediately.  Vincent also unilaterally cancelled all of Richard’s credit card privileges and other related benefits.
Vincent took other actions to freeze Richard out of X, Inc., including draining all of the funds out of the existing X, Inc. bank account, opening a new account to which Richard did not have access, denied access to his X, Inc. e-mail.  Richard received notification from his insurance agent that his insurance was being cancelled because X, Inc. did not pay his bill. Vincent began operating X, Inc., making all decisions and purchases without Richard’s knowledge or consent.

Given Vincent’s unilateral actions, which significantly changed the status quo, Richard sought to purchase the company from Vincent under the same terms set forth by Vincent in the Stock Purchase Agreement, including release of Vincent from his personal guaranty on the lease. In the alternative, as a result of the impasse reached regarding the direction of the company, Richard sought the dissolution of X, Inc. Richard communicated this information to Vincent through counsel.

Given Vincent’s recent actions, it was feared that the injunctive relief was not issued in this case that Vincent could continue to freeze Richard out and take whatever unilateral actions he deemed appropriate for X, Inc., without consulting his fifty (50%) percent co-shareholder.  The actions of Vincent have been undertaken in complete disregard of the shareholders agreement and by-laws which govern X, Inc. and the relations between Richard and Vincent.

In my next post, I’ll begin a discussion of the legal argument made to support the requested injunction.

To discuss your NJ business, commercial or LLC matter, please contact Fredrick P. Niemann, Esq. toll-free at (855) 376-5291 or email him at fniemann@hnlawfirm.com.  Please ask us about our video conferencing consultations if you are unable to come to our office.

[1] Richard subsequently learned, however, that Vincent immediately instructed the staff to give all of Richard’s messages to Vincent. Vincent advised the employees that Richard was leaving. He advised the accountant that his wife would now be handling all financial aspects of the company. Vincent instructed the administrative staff to stop communicating with Richard. Although he has requested same, Richard has not received financial or payroll reports. Richard also learned that Vincent attempted to change the payroll service and open new bank accounts. Vincent has actively frozen Richard out of the company against the parties’ understanding of maintaining the status quo.