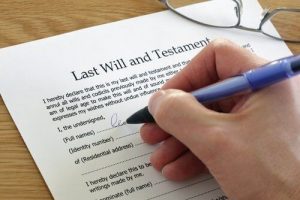 The doctrine of probable intent is an important legal concept in a will interpretation case.  The statutes addressing this subject are found at N.J.S.A. § 3B:3-33 and in N.J.S.A. § 3B:3-33.1 and provide as follows:

One significant case defining the doctrine of probable intent in New Jersey held that “in ascertaining the subjective intent of the testator, courts will give primary emphasis to his/her dominant plan and purpose as they appear from the entirety of his will when read and considered in the light of the surrounding facts and circumstances.”

A husband and wife had separate wills which provided for their estate(s) to be divided equally between their parents and parents-in-law in the event of a common disaster.  The couple died together in a car accident.  The wife’s mother sought to claim the entire residuary estate.  The husband’s parents had both predeceased him.

The court stated that the search for a testator’s probable intent is not limited to “simply searching out the probable meaning intended by the words and phrases in the will.  Relevant circumstances, including the testator’s own expressions of intent, must also be studied, and their significance evaluated.”  Evidence outside of the will should not be used to vary the terms of the will but “should be admitted first to show if there is an ambiguity and second, if one exists, to shed light on the testator’s actual intent.”

The court found that the death of both the husband’s parents prior to that of the testator’s parents was an event that was not actually foreseen, anticipated, or expressly addressed in the wills.  The scrivener of the wills testified that the mothers were considered appropriate representatives of their respective families and that in the event of a common disaster; each testator wanted each estate to be distributed equally between their respective families.  The court concluded that an equal division between their families was intended and that to give the assets of both estates entirely to the surviving mother “would seem to fly directly in the fact of all the evidence bearing on probable intent.”

Interpreting a Last Will for Death Tax and Income Tax Reduction

In another case, the testator’s will revealed his intention to minimize estate taxes; however, his revised will inexplicably included a provision that caused a substantial increase in the federal estate tax.  The court found that a person in testator’s position with substantial means, no children but a wife who had virtually no property of her own, but with whom he happily spent his life, would naturally want to provide for her.  The clause in dispute, however, would frustrate that desire.  Applying the doctrine of probable intent, the court deleted the problematic clause.

In still another tax mitigation case, the estate sought to modify the will to take advantage of changes in the tax laws which had occurred both before and after the decedent’s death.  There was no question that tax considerations were very important to the estate plan.  The court approved of the executors’ application to restructure the testamentary trusts in order to avoid imposition of additional tax.  Specifically, the doctrine of probable intent permitted reformation of the will to avoid imposition of generation-skipping transfer (GST) taxes.

There are several significant principles governing the application of the doctrine of probable intent which should be understood.  First, “courts will ‘strain toward effectuating the probable intent of the testator.”  When “a person’s intent in a will is in issue, the essential endeavor the court must undertake is to put itself in the testator’s position insofar as possible in the effort to accomplish what he would have done had he ‘envisioned the present inquiry’.”

To discuss your NJ estate and trust litigation matter, please contact Fredrick P. Niemann, Esq. toll-free at (855) 376-5291 or email him at fniemann@hnlawfirm.com.  Please ask us about our video conferencing consultations if you are unable to come to our office.