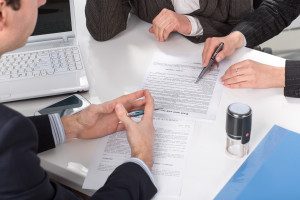 One case of ours involved a particularly interesting family business in Middlesex County, NJ where brothers, family members and the family patriarch worked successfully together for over 30 years… until Dad died and then things changed.  I have removed names in the interests of privacy.

Background of the Family Business Before the Dispute

X, Inc. was engaged in the business of operating a supermarket in South Amboy, New Jersey.  Up and until his death, Frank, Sr. (father of the plaintiff and defendants) held the majority of the company stock.  Frank, Sr. passed away and his shares of X, Inc. passed to his wife, Helen, who held her shares until her death.  Pursuant to Helen’s Last Will and Testament, her shares were left to her children, Edmund (E.P.), Stanley (S.P.), and Helen (HE).  As a consequence, the ownership of X, Inc. was now apportioned as follows:  E.P. (33.3%), S.P. (33.3%), and H.E. (33.3%).

Disagreements developed between the family member shareholders with respect to X, Inc.  Stanley and Helen proposed changes to the operations of the company to improve its profitability in the face of a deteriorating balance sheet, reduced sales and increased debt.  The largest bank lender of X, MC formally noticed the shareholders that the bank was concerned with the ability of the corporation to repay its loans.  Thereafter the bank declared X, Inc. in default and demanded immediate payment of its outstanding unsecured demand notes.

Plaintiff’s response was for all shareholders to come up with their share of cash to payoff the loans.  S.P. and H.E. testified that they were financially unable and unwilling to pay off the loans with cash, were unwilling to Borrow money to do so, and alternatively, wanted to change certain business practices to increase profitability to pressure the bank to postpone its demand. S.P. and H.E. had face-to-face meetings and discussions with E.P. proposing ideas and strategies. The plaintiff declined to implement most of these operational changes.  E.P. interpreted these suggestions as attacks on him.  S.P. and H.E. also testified to meeting with Amboy and its President about X, Inc.  and disclosed their proposed operational changes and plaintiff’s refusal to implement many of these changes.   Each testified that the subject of removing plaintiff as President was discussed by them and the bank at these meetings.  S.P. testified that the bank agreed that if the operational and pro forma changes were implemented and a change of management made, the bank would extend its loans

S.P. and H.E. held a special shareholder’s meeting and voted to remove E.P. as President and CEO.

The issue(s) before the Court were straightforward. The first issue was whether the majority shareholders/directors of this small New Jersey family corporation had the right to replace the plaintiff minority shareholder who was General Manager for twenty nine (29) years with another family member shareholder.

There were several subsidiary issues to this case:

In my next post, I conclude this article with citations to NJ corporate and business law statutes and case law.

To discuss your NJ corporate shareholder Litigation matter, please contact Fredrick P. Niemann, Esq. toll-free at (855) 376-5291 or email him at fniemann@hnlawfirm.com.  Please ask us about our video conferencing consultations if you are unable to come to our office.