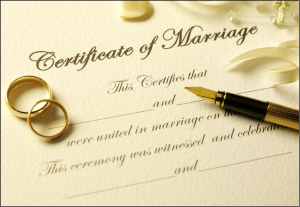 I recently read a series of posts about the title of this blog post.  In all truth, I hadn’t really thought about it or had the issue come up.  Here’s what happened.

A person died with an estate where the decedent left a handwritten Will.  He has a “common law wife” of 30 years.  They were married in New York state.  The common law wife says they were married by a Rabbi in a traditional Jewish service but not in a civil service.  Is she arguably his wife and a class A beneficiary or a mere class D beneficiary for purposes of New Jersey death tax?

The decedent’s Last Will leaves his “spouse” one-third of his estate with two-thirds going to their two children (class A beneficiaries).  If the wife is a class D beneficiary, then the inheritance tax would be paid from her share of her estate.  I am basing this on the estate tax apportionment statute and Hale v. Leeds, 28 N.J. 277 (1958).

Contact me personally today to discuss your New Jersey estate administration matter.  I am easy to talk to, very approachable and can offer you practical, legal ways to handle your concerns.  You can reach me toll free at (855) 376-5291 or e-mail me at fniemann@hnlawfirm.com.